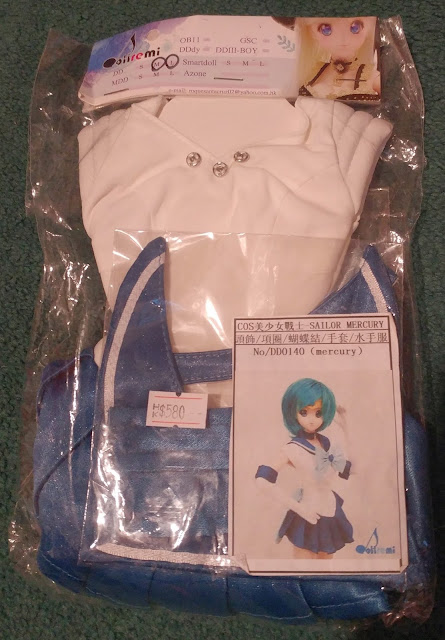 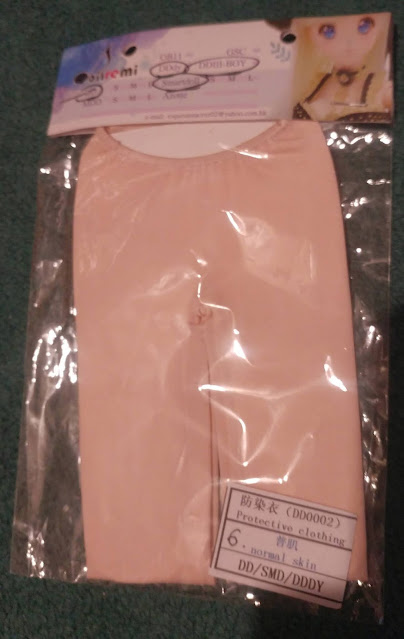 Now I've done it. Now I'll end up trying to complete the entire roster. XD
Before I decided to go all in on the idea of completing the entire roster, I had to consider one thing: Where am I going to get the shoes/boots? For Mercury, I decided to modify something. I bought a pair of beige boots. They were the lace-up kind so this won't be a 100% accurate cosplay but that's not what I was going for anyway. If I wanted "100% accuracy", I would have been better off buying the official Sailor Mercury release.
I ended up buying a pair of worn out beige boots. Some parts were flaking off and the boots were in generally poor condition. 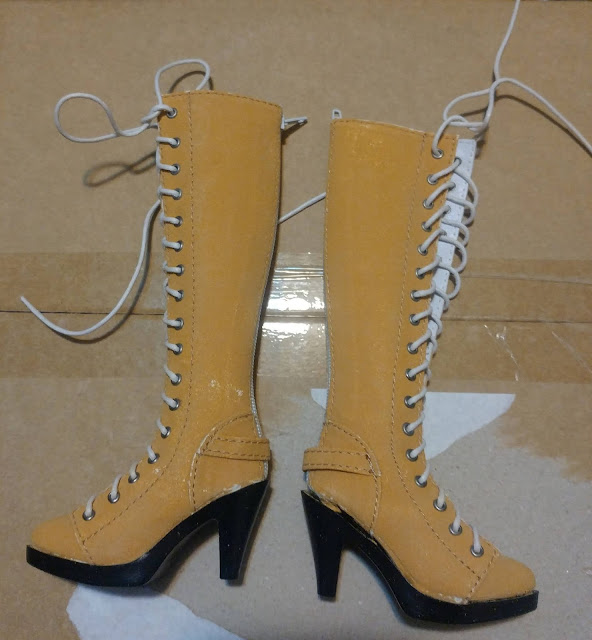 Since I didn't want to destroy a brand new pair of boots, this pair was perfect for what I had in mind... Or so I thought. 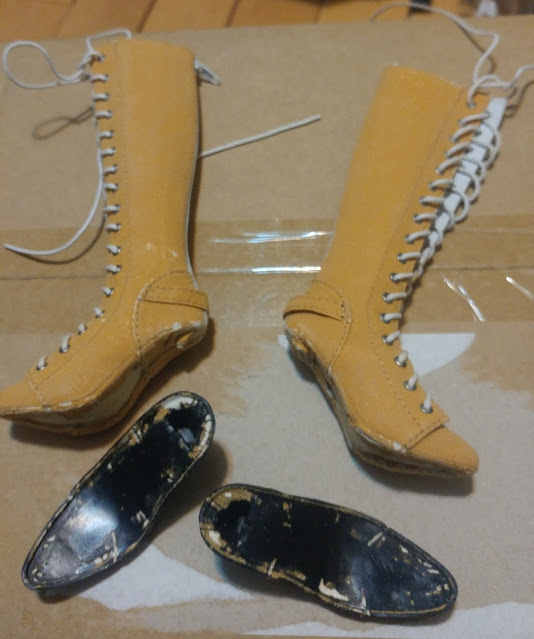 As I was handling these boots, the soles immediately fell off. The boots were literally rotting away. I later ended up using epoxy "plastic weld" glue to put the soles back onto the boots. That seemed to do the trick. 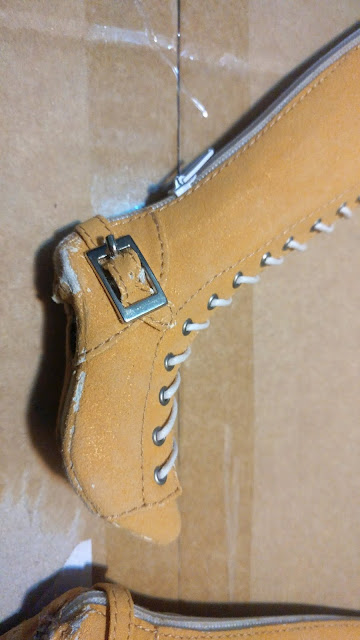 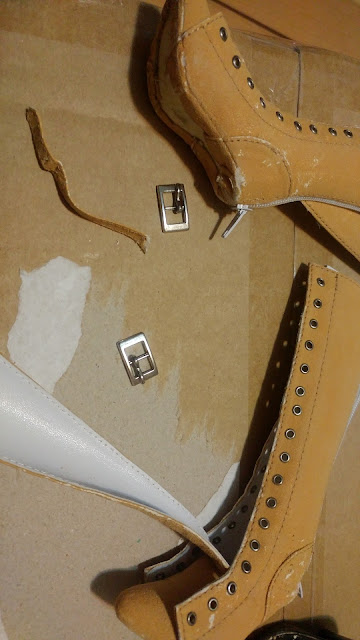 The boots had decorative heel straps and a buckle. These easily tore off from the boots without much struggle.
After I tore off the straps, I decided to paint the boots. I used hobby paint intended for plastic model kits. This wasn't the best of ideas but this actually worked out well in the end. It won't seem that way based on the upcoming photos but I'll provide an explanation. 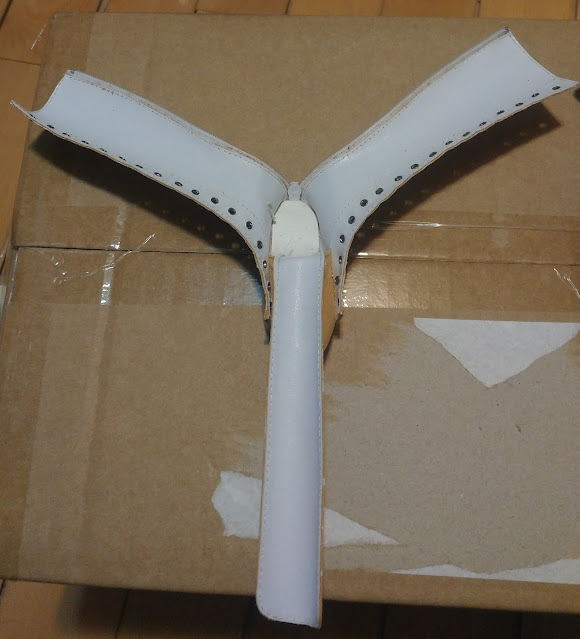 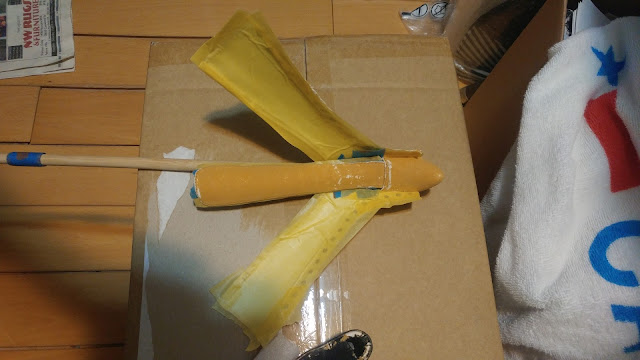 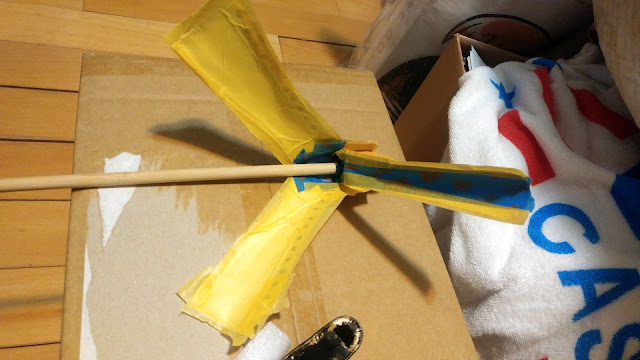 Since the paint I was going to use came in a spray can, I masked off places where I didn't want paint touching. 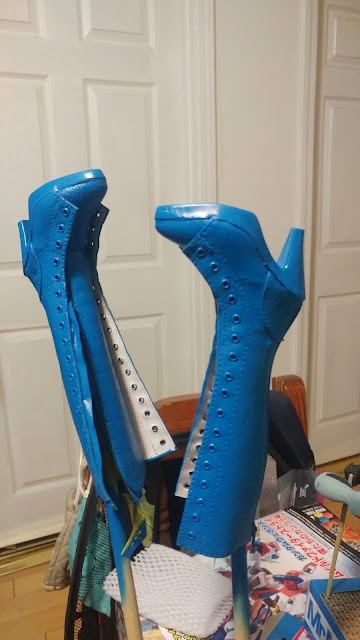 After spraying on a few coats, I applied a clear coat as a cover and protection. I didn't need to worry about damage from the outside at all, though. 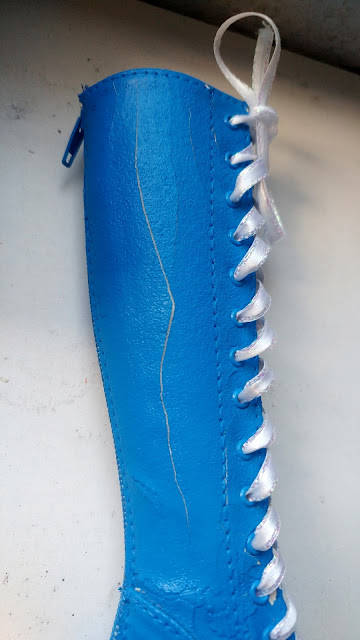 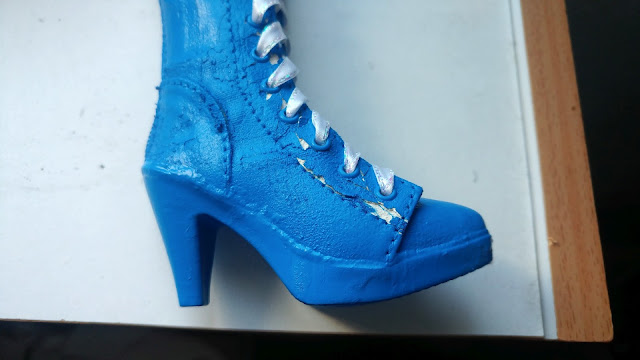 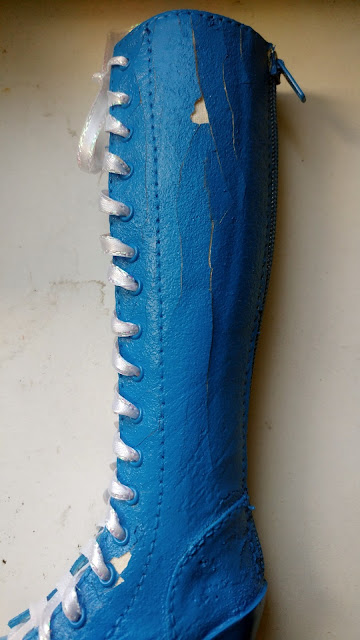 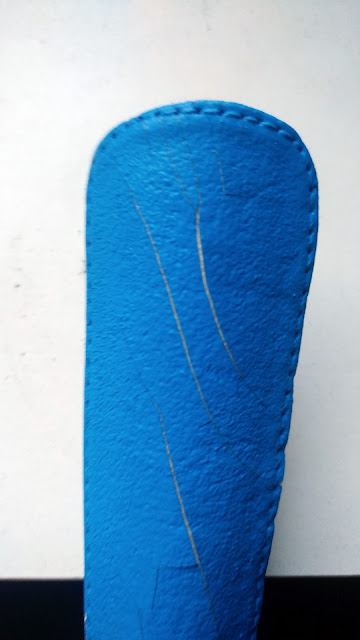 The paint cracked like mad. The hobby paint is great for plastic models with rigid parts but less than recommended for anything flexible. The inflexible paint wasn't the only problem. Once I decided to scrape off the cracked paint, I also scraped off what used to give the boots the beige color. 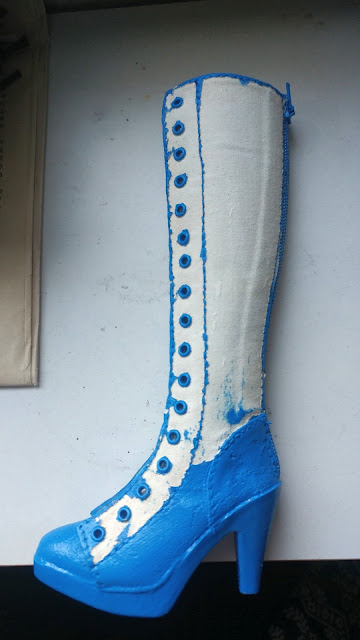 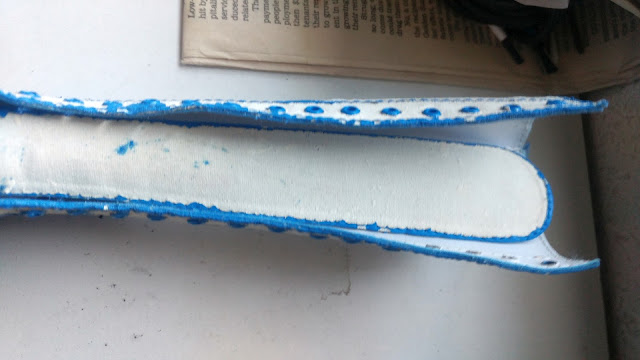 Since the beige surface areas were rotting in the first place, the hobby paint only accelerated the process and cracked. This was fine. Now adding another coat of paint won't just be covering up anything rotting below. This is why I mentioned earlier it worked out well in the end.
I went to a local hobby store and bought a jar of flexible acrylic paint. This seemed to work much better. I threw away the laces the boots came with because they were stained brown at various parts. I used a ribbon to replace the laces. 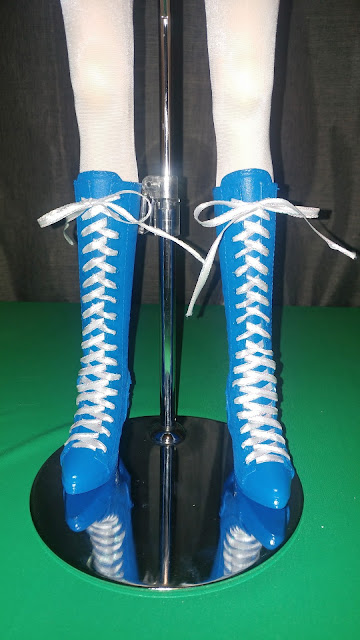 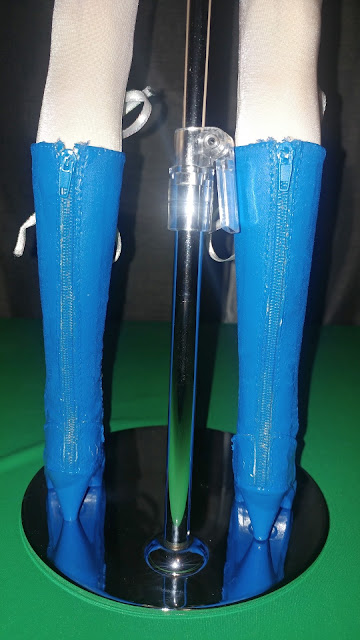 Now that the boots are on, let's get to the Mercury outfit. 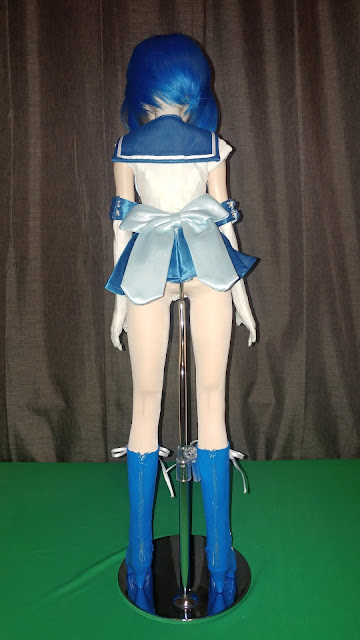 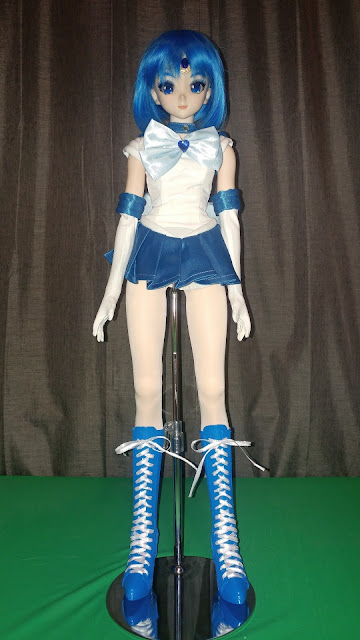 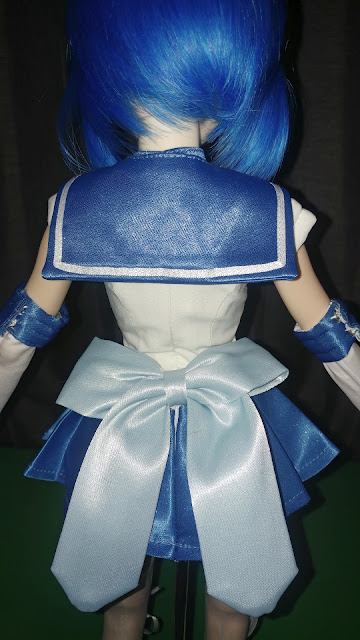 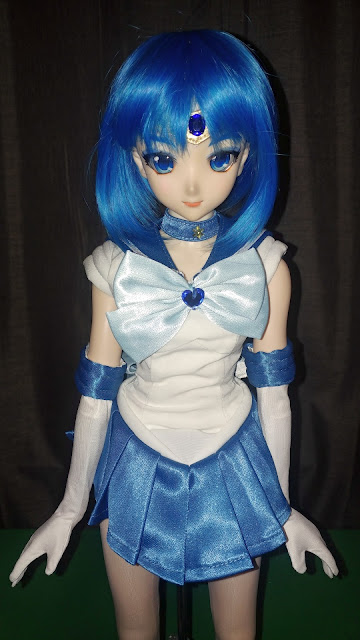 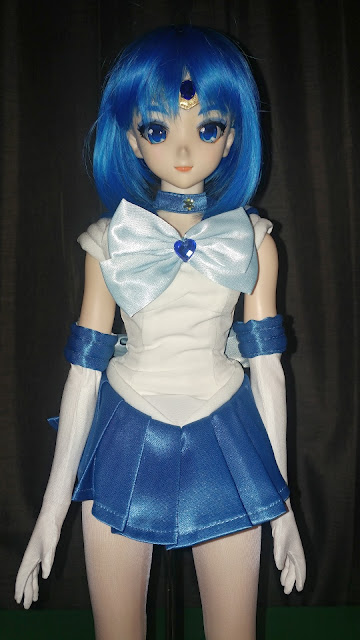 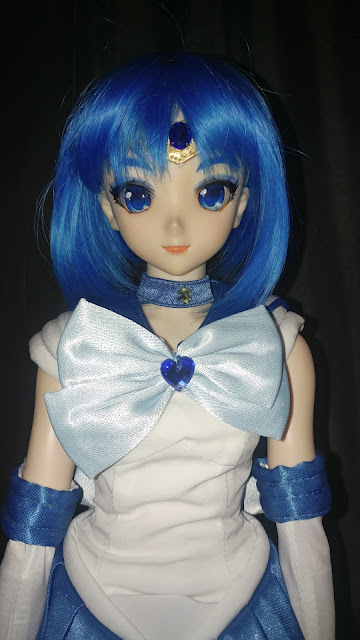 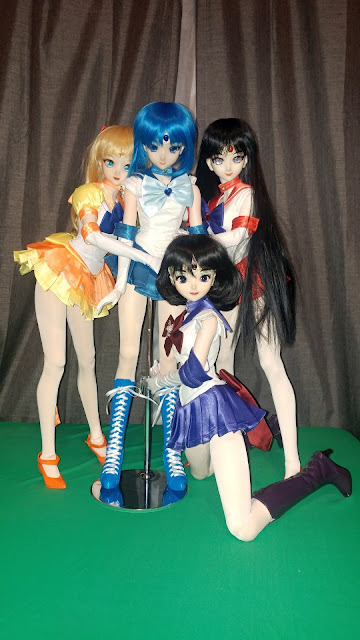 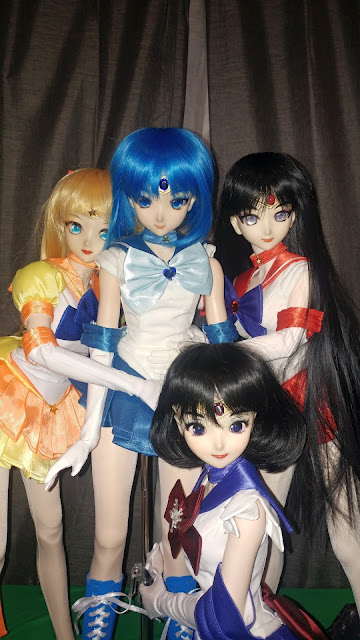 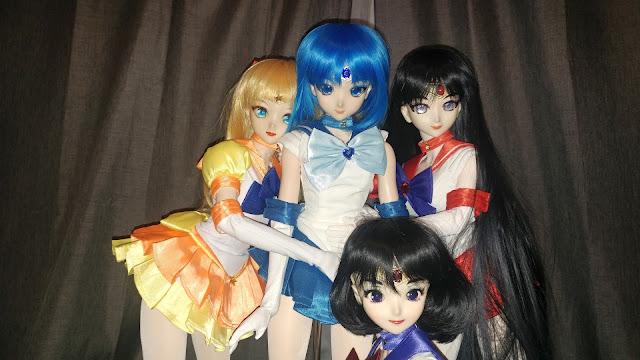